The main figures in this window are Jacques Cartier, a French explorer, his crew and a Franciscan friar on hand to dedicate the cross that was placed in the ground. On the cross is a shield with three fleur-de-lis symbolizing France as well as Our Lady. Above are Native Americans paddling a canoe to remind us of their importance to Cartier during his exploration. The ship to the right of the cross is the flagship used by Cartier for exploration. St. Marquerite Bourgeois, a missionary appears above the cross to the left. You will also see the names of the first bishop of Quebec and the first Superior of a convent there. The vignette pays tribute to two saints, on the left St. Anne and to the right is St. Joseph. Shrines have been erected for both. Sainte Anne-de-Beaupre Shrine, is located in Quebec and St. Joseph’s Oratory is in Montreal.

OUR LADY OF GUADALUPE

The west window of the sanctuary commemorates Our Lady’s appearance radiating a halo surrounding her and being held above the ground by an angel. To her right and below, the Aztecs look up in adoration. We see an Aztec pyramid and to the left the shrine of Our Lady of Guadalupe symbolizing how the Christian faith overcame local pagan tradition. This window incorporates the color gold. Notice the stars in Mary’s veil and the trim on the garments worn by the Aztecs. On the left you will see an inscription to Saint Juan Diego to whom she appeared in 1531. On the right is the pronouncement in Psalm 147. Our Lady acknowledges the peoples of the Aztec Empire which led directly to the conversion of thousands.

The dominant scene in this window depicts the French explorer and missionary, Jacques Marquette standing on a dock. Louis Joliet, another French explorer alongside a companion are seated in a canoe. We see Father Marquette baptizing. The acronym “AMGD” in one of the window panes means “To the greater glory of God,” the motto of the Jesuits. We also see a map of the Mississippi River and a cross outlined in gold marking where Father Marquette died in 1675. A strong Native American motif is evident in this window and the vignette departs from an overly religious display opting for the patterns of the Native Americans and the Midwest. In the upper arch we see a banner and on top a drum head and crossed arrows. On the right of the arch is a pipe and horn. All of these symbols—a Cross, a halo and the Chi-Rho, signify the divine presence in the wilderness.

Situated within the sanctuary, Our Lady’s hands are clasped as she stands on a globe to symbolize the eternal presence in our lives. Pictured above are three angelic figures playing instruments associated with the music of colonial America. To the right of Our Lady is St. Kateri Tekakwitha. Below and to the right is the first American citizen to be canonized, St. Frances Xavier Cabrini. At the lower left is the Basilica of the National Shrine of the Immaculate Conception. Names of other significant figures from American Catholicism appear in one pane to the left of the design.

Captioned, “These are they who are come out of great tribulation,” this window depicts eight men who exemplify this quote from the Book of Revelation. All died at the hands of the Iroquois. Among these martyrs is St. Isaac Jogues. Having been tortured previously, Isaac returned to Iroquois territory and while travelling under the rules of a new peace treaty he was captured and killed at Ossernon (present day Auriesville, New York). On the bottom left appears a tomahawk, a knife and fire—the agents of martyrdom for these saints. The vignette at the top features the celebrated shrine dedicated to them at Auriesville.

Liberty takes on more than one meaning as the major theme of this window. Political as well as religious liberties are represented here. Charles Carroll, the only Catholic signer of the Declaration of Independence is seen in the center of the window holding this famous document with Independence Hall in the background. Several birds fly around the bell tower representing freedom and to the left of this we see the Liberty Bell. The cross represents God’s spirit upon the people. John Carroll, the first Bishop in the United States and nephew of Charles is memorialized with an inscription on the extreme right of the window along with his coat-of-arms.

The design of this window differs from the other windows. The top arch extends down by a double ribbon representing the Via Reale. This is the famous road, on which five missions, represented by bells, are located. The arch creates a frame in which the bell tower of one of the missions, San Luis Obispo, appears. The birds represent the swallows that return to this mission each year on St. Joseph’s Day. Father Junipero Serra, the Franciscan friar who set up these missions is seen in the foreground teaching a Native American to weave a basket. In the pattern of the weave is a cross. In the lower left portion of the window we see Father Serra baptizing. He was canonized by Pope Francis on September 23, 2015.

Christopher Columbus is pictured holding in his right a staff from which hangs a banner with a cross representing Christendom. In his left hand he holds a scroll. In the background are three members of Christopher Columbus’s party, representing the three ships, the Nina, the Pinta and the Santa Maria. The Santa Maria, named after Our Lady is the most prominent. Mary is seen as a protector and a guide as Columbus and his crew travel to the New World.

This window celebrates the discovery of Florida by Juan Ponce de Leon on Palm Sunday 1513. Near the top of the window, the significance of the day is emphasized with Christ proceeding on his donkey through the streets of Jerusalem. On the top of a palm tree to the right of de Leon is the Madonna and Child, symbolic of the Christian presence in the New World. As Ponce de Leon holds a flag of his country and a cross for Christianity, we see a priest holding a staff with a crucifix and ships in the background, signifying the importance of Christianity arriving in the New World.

The Catholic colony of Maryland was established in 1634. The first Mass was celebrated on March 25th through the efforts of the first Lord Baltimore, Cecilius Calvert, his father George and his brother Leonard. All three are included in this window. Under the cross to the right of Leonard Calvert are shown the congregants of the first Mass. We see the vignette of Gabriel’s appearance to Mary and the flower presented to Mary that represented her purity. While the colony was ostensibly named for Henrietta Maria, Queen Consort of Charles I of England, we must assume that Lord Baltimore employed some intentional ambiguity here.

This is one of two windows in the back of Church that draws from the actions and words of George Washington to acknowledge the important contributions that Catholics made during the period of the American Revolution. It is located on the east side and features George Washington himself. In his quote he praises the efforts of Catholic Americans, as well as, the French contributions from, Jean Baptiste Rochambeau, Count Jean Baptiste D’Estaing, Admiral Francoise de Grasse and the Marquis de Lafayette. The oak tree, originating from a tiny acorn parallels Christ’s analogy of the mustard seed. Above are two shields: one representing the United States while the other France. The fleur-de-lis is evident here, which symbolizes not only France but Our Lady.

The second window in the back of Church on the western side, pays tribute to Catholics serving as commanders during the Revolutionary War. At the left is Casimir Pulaski (‘Father of the American Calvary”), on the right Commodore John Barry (“Father of the U.S. Navy”) and below is General Thaddeus Kosciusko. To his right is a cannon and ordinance emphasizing his artillery tactics contribution to our nation. Of interest is the fact that all three men were born abroad, illustrating further testimony to the immigrant spirit so powerfully present in this parish.

The final and most spectacular window, the Sacred Heart Window is located on the eastern side of the church. Jesus is at the center, standing on a cloud, while holding his Sacred Heart with rays of light shining from behind Him. A departure from the monochromatic design found in the other windows throughout the Church, this window depicts Jesus wearing a red robe. There are prayers above His head and inscriptions of the Twelve Promises Jesus pronounced to St. Margaret Mary Alocoque in 1664. St. Margaret Mary Alacoque, V.H.M., was a French Roman Catholic nun, who promoted devotion to the Sacred Heart of Jesus in its modern form. The chamber dominated by this window is a shrine to the Sacred Heart with an altar and devotional candles to be lit by our faithful parishioners. 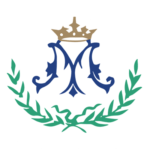 Serving the Community since 1922